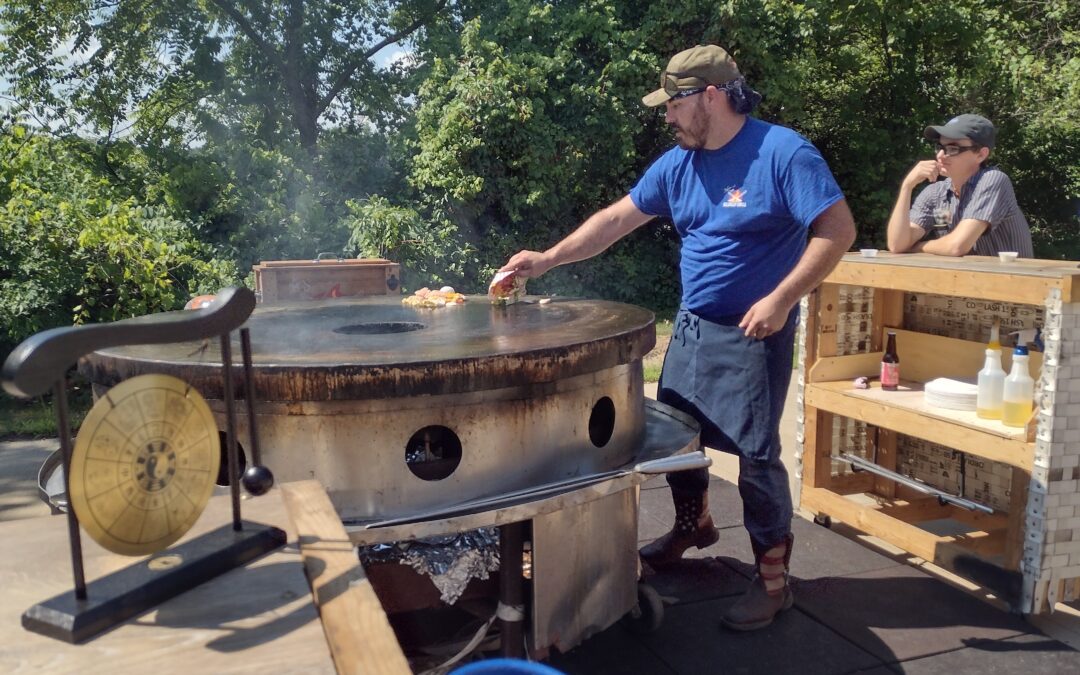 For Aaron Johnson, living the dream means catering Mongolian Barbecue-style stir-fry over a 600+ degree griddle. We are happy to support that!

The luncheon brought Aaron’s passion for cooking and natural showmanship to the forefront. A 90-degree high temp for the sunny July day couldn’t keep him from singing and entertaining as he cooked.

The food was outstanding.

Beyond the grill: A mill operator with a knack for optimization

In the shop, Aaron optimized the Hurco mill for quick setup time and high run capacity. He specializes in 5S — a methodology of workplace organization that results in clean, safe, and efficient workspaces.

His overhaul of the mill was extensive — including job-specific setup boxes, a precisely organized and labelled tooling cabinet, and a fixture plate within the mill that allows the operator to quickly make and change setups.

“The end result is that most of the tooling an operator needs to set up and run the machine is within 2 feet of the main work area,” said operations manager John Bogardus.

This speeds up setup and operation time. For instance, where the mill could once run five of a certain part per hour, now it can run eight. And the mill can now produce eight parts at a time where before it was limited to two — a big difference for a hand-loaded machine.

“He brought a lot of knowledge about mills to Micron and in turn he’s learned a lot about lathes,” Bogardus said.

The story of the grill

Aaron came by his stir-fry acumen by working at a Mongolian grill restaurant. When he saw a grill on auction, he found himself one of the only people to bid on it.

Transporting his winnings was another story. Aaron had to call in some favors, borrowing a trailer, a bobcat, and plywood boards for a makeshift ramp.

“The grill was basically the only thing I had in the beginning. I remember my first grad party the host let me use his trailer,” Aaron said.

But he’s since scaled up his operation, adding the stand-up tables, his own trailer, lots of tools, and a hand-crafted buffet table he and his dad built together.

AJ’s Hillybilly Grill caters events for 50 people and up. They offer a customizable meal, where guests can choose from an array of meats, vegetables, seasonings and sauces, which are then cooked to order on the searing hot griddle. Also on the menu: a griddle-cooked mac and cheese that is fantastic.

Micron is an inspired workplace crewed by passionate people. We have open positions for machinists and a clean and pack technician. Apply here if you are interested in living and promoting the American dream with us. 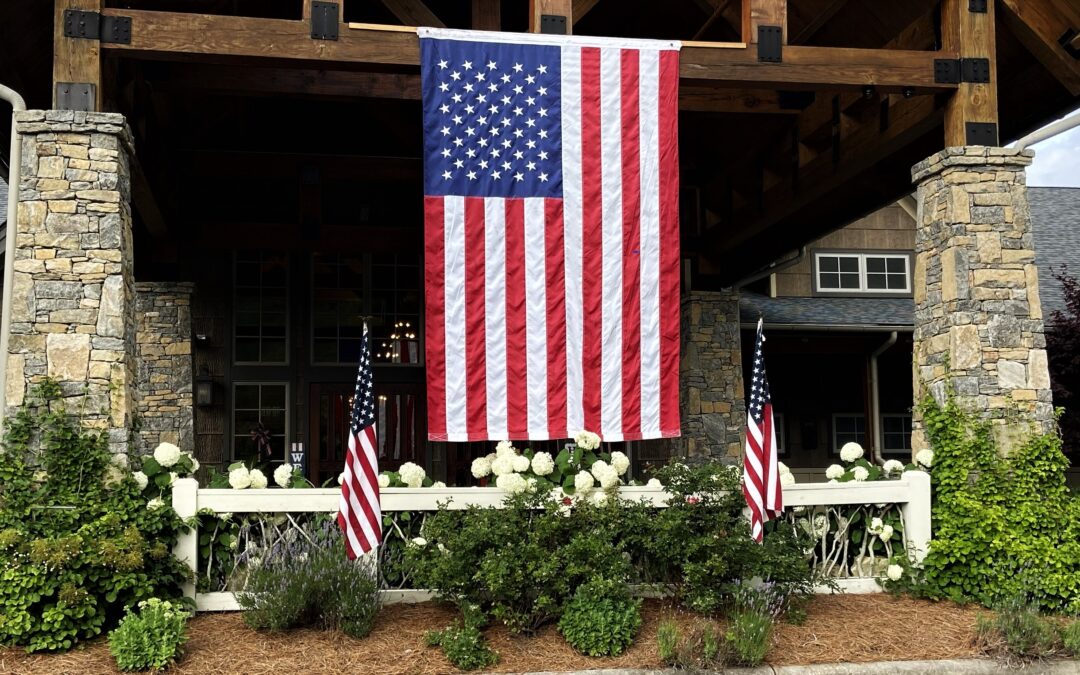 If you’re reading this, we hope it’s after the holiday. Today is a time to be with family, enjoy yourself in the sun (or whatever weather), and celebrate our hard-fought-for way of life.

This holiday commemorates the signing of the Declaration of Independence. It was both an assertion that Americans are a people and the formulation of a national idea — that individual liberty and self-governance are God-given rights. That we will do whatever it takes to secure these liberties because it’s our destiny to do so and because it’s the right thing to do.

The Declaration of Independence did not create a government — that came later with the penning of the constitution. Rather, it gave rise to a nation — the American nation. And that is probably why this holiday stirs patriotism in us regardless of day-to-day affairs. 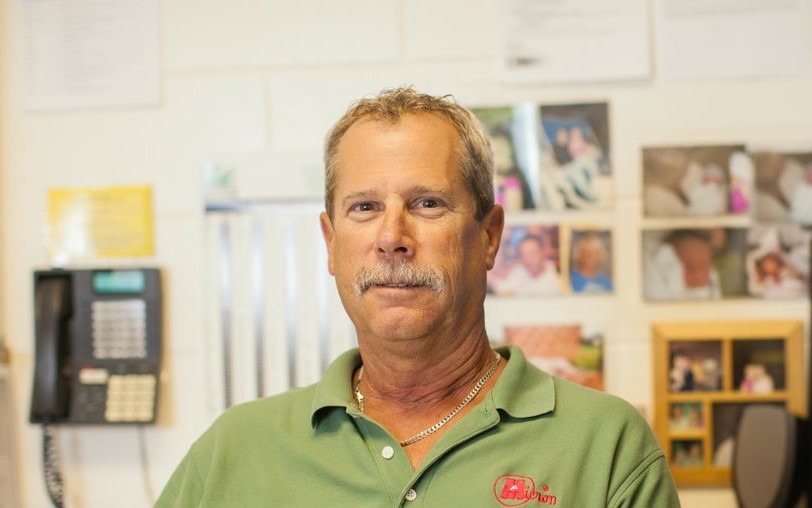 Smith completes a 48-year career at Micron, throughout which he saw the transition from screw machines to CNC, rose to the position of engineering manager, and was an integral part of the company leadership and strategy team.

Smith’s career at Micron corresponded with many of the changes we’ve made to our facilities, systems, and services over the years. He had his hand in so many of these great changes it’s hard to find any major improvement to Micron that Smith hasn’t touched.

Throughout his career at Micron, Smith witnessed big changes in the machining industry and played an important role in bringing those changes to Micron.

According to CEO Mike Preston, Smith’s institutional memory is “the machining equivalent of being in the car industry since the horse and buggy.”

Smith originally started at Micron as a machinist, working on Brown and Sharpe screw machines. Eventually, Micron started phasing out the cam-driven “Brownies” and replacing them with CNC machines.

However, the reduction of secondary operations coincided with a need for someone to facilitate the new wave of production. Smith was the right person to step into that role. The engineering department was born as a result. And Smith, a foreman at the time, became Micron’s first engineer.

While those secondary processes went away with the introduction of CNC technology, “Mike adapted to the additional task of facilitating the new wave of production that went through the shop,” Preston said.

Improving our processes and systems

Through his work on the engineering and company leadership teams, Smith became known for his ability to streamline processes and improve efficiency.

“Mike’s great at honing systems,” said IT specialist Dave Seabrook. “He could look at a system and tell what would or wouldn’t work with it.”

Smith helped Micron improve its efficiency by adopting 5S methodology. Better organization of our tooling sped setup times for the machines, which in turn reduced costs. He also implemented a reorder system and a Kanban system for our perishable tooling.

In addition to reducing costs through improving efficiency, Smith also had a knack for thrift. “He was really good at figuring out ways to use what we had instead of buying new machinery,” Seabrook said. “And when it came time to selling and purchasing equipment, that was an underrated skill he had.”

As such, Smith’s abilities contributed greatly to our initiative to standardize equipment throughout the shop. He oversaw the purchasing of the Citizen machines that replaced the Brown and Sharpe screw machines.

Smith was an integral part of Micron’s leadership team. He developed strategies and goals for the company, and facilitated their implementation. Smith “was the realist of the group,” said quality head Brian Hoff. “He liked to cut through noise in the conversation. He was our time cop, too.”

During his last years at Micron, he became especially involved in coaching employees. To sum it up: “Smith in one way or another influenced everyone he worked with — his skills rubbed off on people,” Seabrook said.

An ambassador for Micron

While Smith brought many good changes within the company, he was also an ambassador for Micron in the manufacturing community.

He was Micron’s liaison to the Kent Career Tech Center — a local skills centers that trains machinists. Smith also served as chair for the West Michigan Chapter of the PMPA (Precision Machined Products Association) — our industry organization.

Meanwhile, many of our customers have worked with Smith in a design support capacity — working together on future projects and parts yet to be made.

“He’s always been a good point person for design support,” Preston said, and generally “a good ambassador for the company.”

Smith plans to devote his newfound time to being with family and enjoying his hobbies. He has 2 daughters and 5 grandkids, and enjoys travel, camping and golfing. We hear he’s looking forward to putting the new motor home on the road this summer.

Though Smith is no longer with Micron full time, his involvement with Micron will continue in some capacity. “He will be returning for special projects. In fact, he’s already slotted in for fall,” Preston said, adding that happily, his expertise is “only a phone call away.”

From Micron to Mike Smith: We thank you for the wonderful career you made here at Micron and your many accomplishments. We wish you all the best in your retirement. Enjoy your time with family and on the road and we’ll see you again soon.